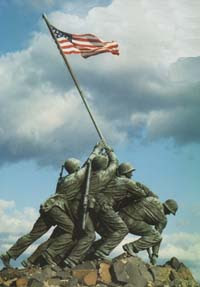 Each year on June 14, we celebrate the birthday of the Stars and Stripes, which came into being on June 14, 1777. At that time, the Second Continental Congress authorized a new flag to symbolize the new Nation, the United States of America.

The Stars and Stripes first flew in a Flag Day celebration in Hartford, Connecticut in 1861, during the first summer of the Civil War. The first national observance of Flag Day occurred June 14, 1877, the centennial of the original flag resolution.

By the mid 1890's the observance of Flag Day on June 14 was a popular event. Mayors and governors began to issue proclamations in their jurisdictions to celebrate this event.

In the years to follow, public sentiment for a national Flag Day observance greatly intensified. Numerous patriotic societies and veterans groups became identified with the Flag Day movement. Since their main objective was to stimulate patriotism among the young, schools were the first to become involved in flag activities.

In 1916 President Woodrow Wilson issued a proclamation calling for a nationwide observance of Flag Day on June 14. It was not until 1949 that Congress made this day a permanent observance by resolving "That the 14th day of June of each year is hereby designated as Flag Day . The measure was signed into law by President Harry Truman.

Although Flag Day is not celebrated as a Federal holiday, Americans everywhere continue to honor the history and heritage it represents.

This information copied from: http://www.pueblo.gsa.gov/cic_text/misc/ourflag/titlepage.htm

No Presidential Proclamation could be located.