﻿Alpine Township officials took advantage of the offer by the Alpine Township Fire Department to tour the three Township Fire Stations to get better acquainted with the premises, vehicles, and equipment, and to help identify some much needed repairs.  Because the majority of the Board of Trustees would be present, the event was noticed out as a meeting.  Special attention was paid to cooling and heating, parking lot repair, general appearance, and utilization of space.  "On call" Alpine Township firefighters respond to nearly a thousand medical emergency and fire calls a year.
at 7:34 AM No comments:

Christmas Breakfast at the Township

Alpine Township Employees coming to work this morning were treated to breakfast thanks to the generosity and cooking skills of Alpine Township Assessor Betty Keeling.  Betty must have arrived well before dawn, as employees arriving at work were welcomed by the wonderful aroma of eggs with sausage and other ingredients made on a skillet, baked oats, and coffee. The food tasted absolutely fantastic and everyone was happy with the oppportunity of fellowship.  Thanks, Betty! 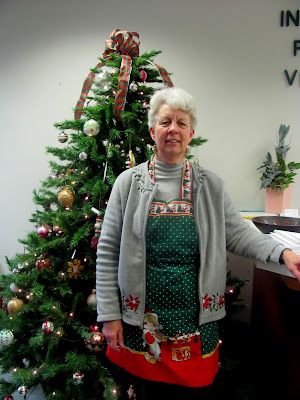 Betty Keeling prepared and provided breakfast for the entire staff. 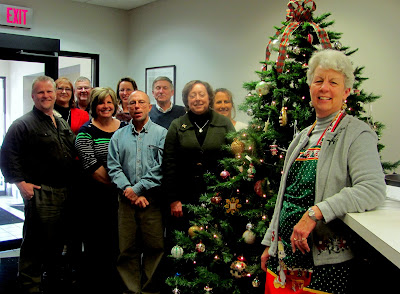 Those who appreciated Betty's Christmas gesture were from left to right:  Gary Campbell, Pat Kolkman, Alex Arends, Beth Alt, Sue Thomas, Jim Townsend, Ron Christian, Jean Wahlfield, and Julie Burelski.  Betty is in the foreront.  Missing in the picture are Bob Devereaux and Erin Randall.
at 7:53 PM No comments:

About forty children were on hand at the Alpine Township  Branch of the Kent District Library as several reindeer arrived tonight.  It was all part of a tour sponsored by the library.  The children enjoyed not only seeing the reindeer but also being able  to touch and pet them.  Several of Santa's helpers were on hand to answer questions from the audience.  Those present learned that the reindeer are generally found in Scandinavia.  Also interesting to learn was that the average life span of a reindeer is approximately 14 years, although it is 10 years in Scandinavia, due to worse weather conditions..  One of the children asked if these reindeer coud fly, and was informed that in order for the reindeer to fly, they need special sprinkling dust that only Santa can provide.  The reindeer were provided by Rooftop Landing Reindeer Farms in Clare, Michigan.  Kids who stopped in the library were treated to a candy cane 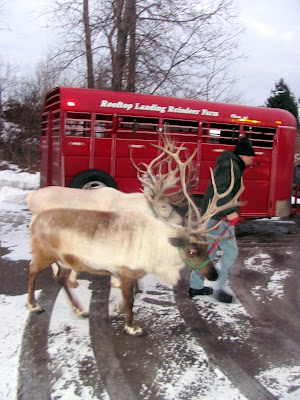 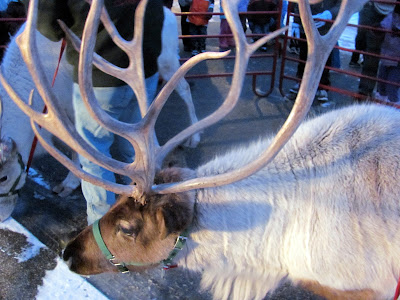 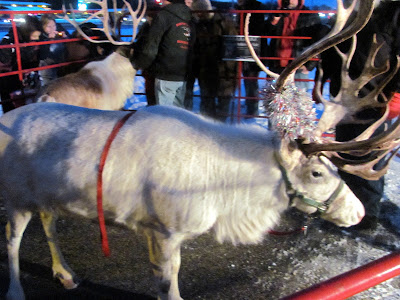 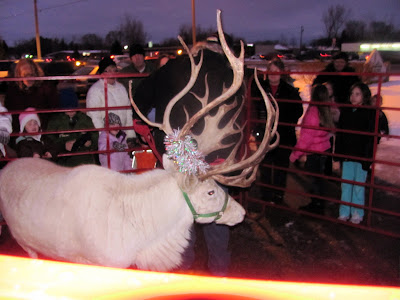 Alpine Township Hall was full of activity Saturday morning as hundreds of presents were sorted and distributed to Santa's helpers as part of the Santa Girls projects sponsored in part by the Grand Rapids Press.  Distribution and delivery of the several hundred packages was spearheaded by Nancy Mulder, Manager of the Comstock Park Branch of the Kent District Library and an active Rotarian.  Dozens of Comstock Park Rotarians, their families and friends volunteered to deliver the packages going to local recipients.
﻿﻿ 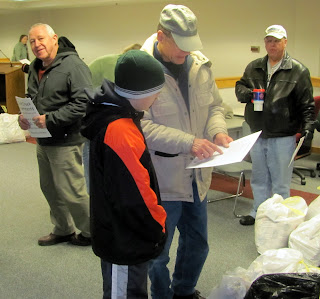 Looking over the map.  At left Bernie Spuit, at right, Ed Hood
at 1:48 PM No comments: 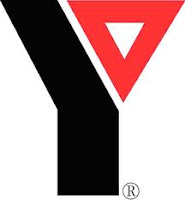 The Wolverine World Wide YMCA offers programs and classes in the Alpine Township and Comstock Park area and to participate, you don't have to be a YMCA Member. This includes pre-school and youth swimmig lessons at the Alpine Slopes Swiming Pool, 4285 Alpenhorn Dr. NW,  Baby Sitting Classes at Mill Creek Middle School, 100 Betty St. NE,   and Personal Safety classes  ("Safe on my Own" at Pine Island Elementary School, 6101 Pine Island Dri. NE.  There is a charge for these programs and classes but scholarships are available for those experiencing financial hardships.  Call The YMCA at 363-3000 or download the registration form by clicking here.
at 7:44 AM No comments:

Shop with the Sheriff

Shop with the Sheriff is just another program that demonstrates the high level of dedication offered by the officers and staff of the Kent County Sheriff Department. 65 local children were selected by local schools and community service agencies to join deputies and other officers from the Sheriff Department to do some serious shopping.  The kids shared a ride with the officers from Sam's Club's parking lot and were dropped off at the doorstep of the Walmart store,  40 police vehicles were counted with sirens and lights on, creating a parade type atmosphere.  On their way in, the kids received a $100 gift card for them to use with the stipulation that 75% or more be spent on clothes, shoes, and sundries. Once inside the store, they were met by Santa and his elfs.  Santa also had plenty of helpers, in fact there were enough deputies on hand to assist all of the young shoppers.
Alpine Township commends the Kent County Sheriff's Department,  the deputies who patrol our Township, our community policing officer Nate Ertle, the generous donors from the community, and Walmart for their contribution and participation. 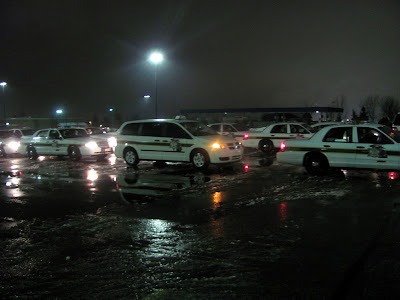 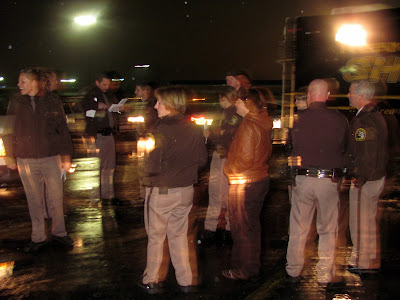 Deputies awaiting the arrival of the 65 kids 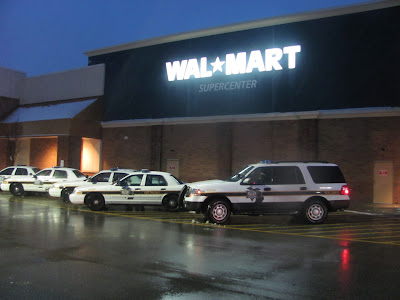 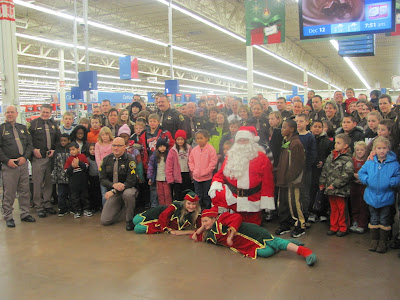 Some of the kids and deputies surrounding Santa 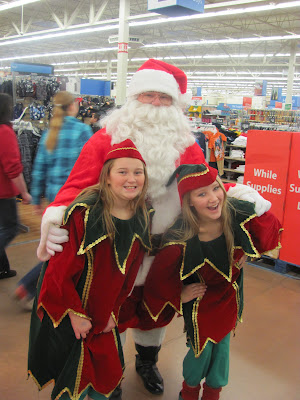 Santa picked up a few things as well; things he forgot to take when he left the North Pole 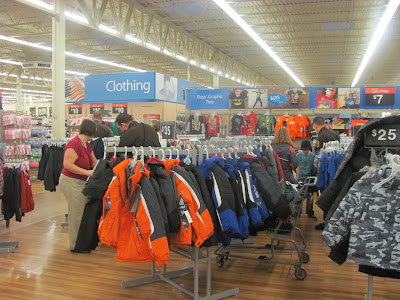 Outerware was in big demand
at 9:43 AM No comments:

The Alpine Firefighters Association hosted their first Breakfast with Santa at the Family Center of Holy Trinity Church.  Breakfast was from 8:00 AM until 1:00 PM, with guest appearances by Santa Claus.
The Association thanks everyone who attended and who undoubtedly will see this as an annual event. 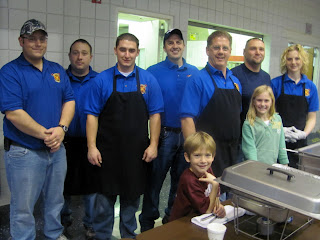 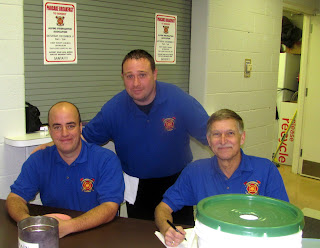 From left to right, Joe Schweitzer, Jon Jenkins and Chief Ron Christians were pleased with the attendance 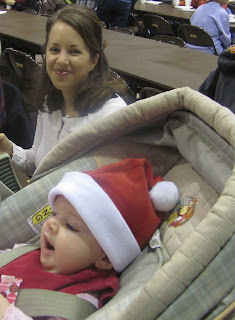 She offered to play Santa but her mom, Erin Bueschel would not let her 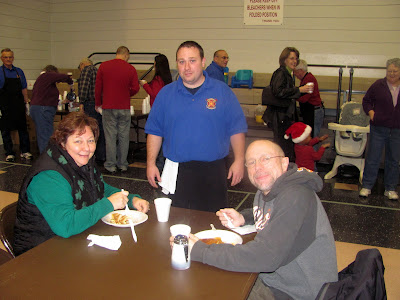 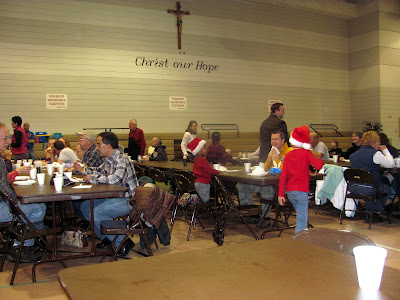 ﻿Steady streams of supporters showed up for five hours
at 7:18 PM No comments:

It was just as expected. 9:30 AM rolled around as did Engine 2635 of the Marquette Rail.. It stopped at the old train depot in the back of Dwight Lydell Park much to the delight of the several hundred spectators. Sure enough, Santa and Mrs Claus took the time to get off the train and aided by a large group of elves, passed our candy canes to all the youngsters in the crowd. Wayne, the Marquette Rail conductor for the day even passed out several Christmas trees to deserving families, courtesy of Jim Nickelson's Christmas Tree Farms. Then it was on to Sparta, to greet more kids, and then numerous other stops on the way to Manistee to make other kids happy. The smiles on the faces of the children more than expressed their appreciation for the opportunity to see Santa and his entourage.
This was also a well deserved break for Santa's reindeer, which are on tour themselves and are expected to visit the Alpine Township KDL Library at 5255 Alpine NW in Comstock Park on Wednesday December 22 2010 at 5:00 PM. All are welcome there as well. 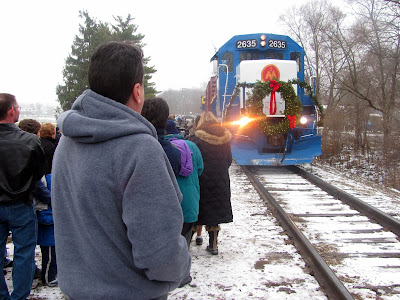 Right on time, and all decked out for Christmas 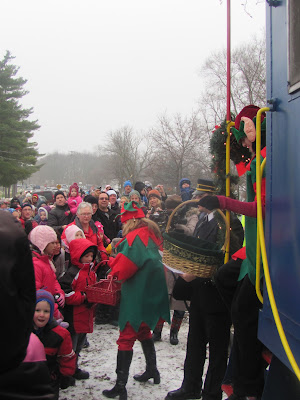 Off the train and right to work 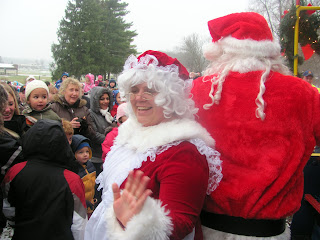 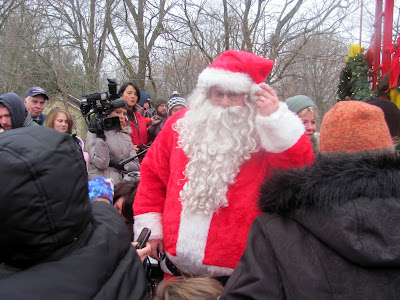 Not only happy but all were good too 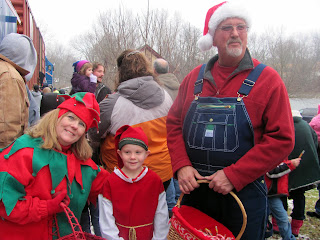 Santa's helpers came in all sizes 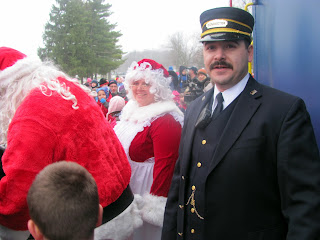 Wayne the conductor was pleased with the large turn out. 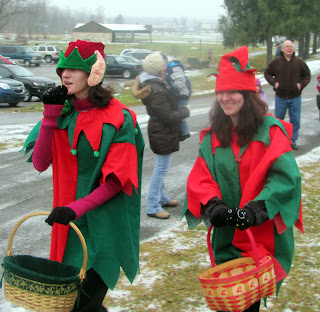 The elves were very busy. 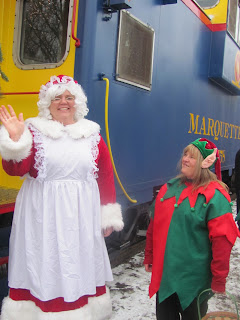 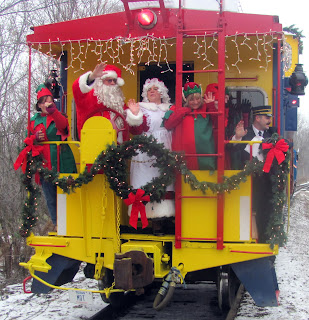