On Wednesday morning, about fifteen concerned community leaders got together at Zion Lutheran Church on Lamoreaux to discuss improving recreational opportunities and social interaction for the residents and particular the children living in the York Creek and Alpine Slopes apartment complexes. The group represents Comstock Park Schools, York Creek Apartments, Alpine Township, the Comstock Park Branch of the Kent District Library, the Belmont and Downtown YMCA, Wedgewood Christian Services, and pastors and representatives of various ministries in and near Alpine Township. The group was organized a few month ago by Dan Clark, of Clark Nurseries, who saw it as an opportunity to witness to many in need. Since the first meeting, the group has expanded dramatically. Special guest today was Nick Monoyios, chief planner for the RAPID Transit System. He laid out the current bus route and explained some options for expanding or adjusting the current route. There has been significant interest expressed by members of this group as well as other entities in expanding the route to include service to Downtown Comstock Park and Dwight Lydell Park.
York Creek and Comstock Park Schools talked about the recent partnership they developed. York Creek has donated two apartment complexes to Comstock Park schools which will house summer programming for students. This will allow some of the above mentioned organizations to provide academic enrichment and remediation as well as social, emotional, and behavioral programming. Also presenting curriculum will be Arbor Circle, an organization Alpine Township and several neighboring townships support through Community Development Funds.

Alpine Township brought up the fact that work will begin very shortly on new side walks on York Creek Ave, allowing easier and safer access to Alpine Ave. This project too is paid for with Community Development Funds. Membersof the group expressed an interest in improving sidewalks that would give residents a safe opportunity to walk to Dwight Lydell Park on foot.
The YMCA introduced Swimming Lessons which will be conducted at Alpine Slopes.
Wedgewood Christian Services will be sponsoring Movies at the Park at Dwight Lydell Park on June 18th.
The Library plans to sponsor a Fiesta later this summer.
Comstock Park Schools will be offering another Community Fair on August 24th.
We hope to promote and feature some of these activities over the weeks to come.
Alpine Township applauds the individuals and organizations who step forward to improve the quality of life in our community. This truly is "Building Community" 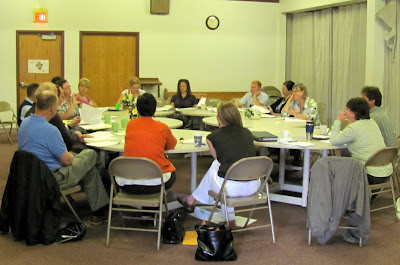 A concerned group that meets regularly and has been able to turn ideas into action.