About a hundred people were waiting in line this morning for the opening of the new Salvation Army Thrift Store located at 3900 Alpine Ave, former home of the Best Buy Store.  Before they could enter the store, they were treated to  a performance by the Salvation Army's brass band, and a ribbon cutting ceremony sponsored by the Grand Rapids Chamber of Commerce  There were plenty of Salvation Army dignitaries on hand as well as representation fro the Grand Rapids Chamber of Commerce and Alpine Township.  The store will be a great addition to Alpine Township, both as a retail outlet as well as a mission.  Rumor has it that the Salvation Army will soon have a neighbor occupying the other half of the large facility. 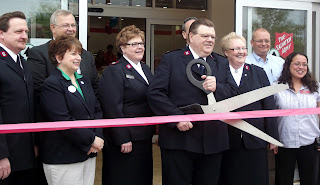