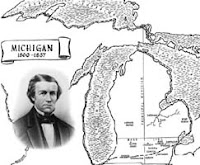 Last Sunday, the Alpine Township Historical Society was honored to have William A, Burt, a famous surveyer, as its guest speaker. Born in Worcester, Massachusetts ,Burt lived in Michigan from 1822 until his death in 1858. He was a member of the Michigan Territorial Legislatur from 1826 to 1827. He served as Mount Vernon's first postmaster from 1832 to 1856. He was a Macomb County Circuit Court judge in 1833, a state legislator in 1853, and a deputy U.S. surveyor from 1833 to 1853. While surveying, he won acclaim for his accurate work on public land surveys.  He invented several tools that became popular .
Mr. Burt came to Alpine Township on Sunday October 17 in the form of Jack Bueche, a more recent surveyor and a historian, from Wyoming, Michigan.  He delighted a full house with his stories and anecdotes.  More information on William Burt can be found at http://www.geo.msu.edu/geogmich/burt.htmL 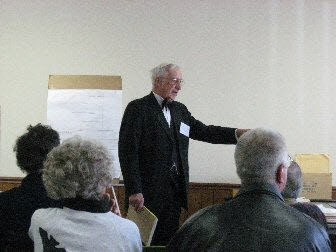 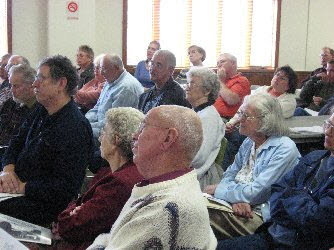 About forty history buffs filled the Community Building
at 12:02 PM