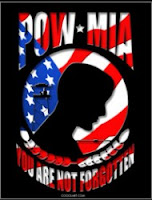 On Monday, August 15, 2011, the Alpine Township Board of Trustees passed a declaration proclaiming  September 16, 2011 as National POW/MIA Recognition Day.  Today, Friday September 16, this proclamation was presented along with proclamations from other local communities at a special commemoration service in the chapel of the Michigan Veteran's facility on Monroe Ave NW in Grand Rapids.  Representation from numerous federal, state, county and local governments were on hand to recognize the sacrifices not only of those Michigan soldiers who suffered as prisoners of war or who have still not returned home, but also the agony suffered by family and close friends.  In addition to comments from the many officials in attendance, the following declaration signed by Barack Obama was read:
" In every conflict in which our Nation has been involved, selfless American service members have sacrificed their lives for the sake of our country and its principles. Too many have never come home, or have endured unthinkable hardship as prisoners of war. On this day, we echo the creed inscribed on the black and white banners that fly in honor of America's Prisoners of War and Missing in Action, and we renew our promise to our heroes, that "You Are Not Forgotten."
We will never give up the search for those who are held as prisoners of war or have gone missing under our country's flag. We honor their sacrifice, and we must care for their families and pursue the fullest possible accounting for all missing members of our Armed Forces. Together, we must serve our Nation's patriots as well as they have served us by supporting them when they come home, and by carrying on the legacy of those who do not. This is a promise we keep for our fallen, for our veterans past and present, and for all those whose loved ones have not returned from the battlefield.
On September 16, 2011, the stark black and white banner symbolizing America's Missing in Action and Prisoners of War will be flown over the White House, the United States Capitol, the Departments of State, Defense, and Veterans Affairs, the Selective Service System Headquarters, the World War II Memorial, the Korean War Veterans Memorial, the Vietnam Veterans Memorial, United States post offices, national cemeteries, and other locations across our country. We raise this flag as a solemn reminder of our obligation to always remember the sacrifices made to defend our Nation.
NOW, THEREFORE, I, BARACK OBAMA, President of the United States of America, by virtue of the authority vested in me by the Constitution and the laws of the United States, do hereby proclaim September 16, 2011, as National POW/MIA Recognition Day, and I urge all Americans to observe this day of honor and remembrance with appropriate ceremonies and activities.
IN WITNESS WHEREOF, I have hereunto set my hand this fifteenth day of September, in the year of our Lord two thousand eleven, and of the Independence of the United States of America the two hundred and thirty-sixth.
BARACK OBAMA"
Source: whitehouse.gov
There were also presentations made by other service men and the names were read of all those Michigan Service men and women who remain missing in action since the Korean war.

After the ceremony, those in attendance had the opportunity to meet some of those who call the veteran's facility their home, and listen to some of their fascinating stories of patriotism and courage.﻿
﻿ 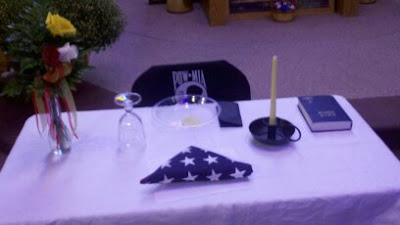 This small table here in a place of honor. It is set for one.This table is our way of symbolizing the act that members of our profession of arms are missing from our midst. They are commonly call POW's or MIA's…we call them brothers.
They were unable to be with us this afternoon and so we remember them. This table set for one is small... it symbolizes the frailty of one prisoner against his oppressors.
The table cloth is white... it symbolizes the purity of their intentions to respond to theircountry's call to arms.
The roses displayed in a vase reminds us of the families and loved ones of our comrades in arms who keep faith awaiting their return.
• The red Rose denotes passion and love
• The yellow Rose denotes passing love (as ending a romance)
• The white Rose denotes purity and new beginning
The red ribbon tied so prominently on the vase is reminiscent of the red ribbon worn on the lapel and breasts of thousands who bear witness to their unyielding determination to demand a proper accounting for our missing.
The Bible represents the strength gained through faith to sustain those lost from our country, founded as one nation under God.
A slice of lemon is on the bread plate... to remind us of their bitter fate. There is salt upon the bread plate... symbolic of the family's tears as they wait.
The glass is inverted... they cannot toast with us today
The chair is empty... they are not here.
Remember... all of you who served with them and called them comrades, who depended on their might and aid, and relied on them... for surely... they have not forsaken you.
at 10:41 PM