National Patriot Day takes on special significance this year as it marks the tenth anniversary of the tragic events that occurred on Monday, September 11 2001. Many communities are commemorating in different ways but what is probable the biggest local event is "The Healing Fields", a flag tribute that runs through September 13, 2011. Over 3.200 flags are on display at the Canonsburg Ski Area representing all those who lost their lives. Flags are displayed in order of the events that took people's lives. Each displayed flag has the name of a victim attached. Some carry an anecdote. Special programs are scheduled for the next several days. Some of the displayed flags are still available for purchase. More information is available at http://www.healingfield.org/west-michigan-2011/.  The Alpine Township Fire Chief Ron Christians and Assistant Chief Mike Lasko participated in the ceremonies Saturday morning. 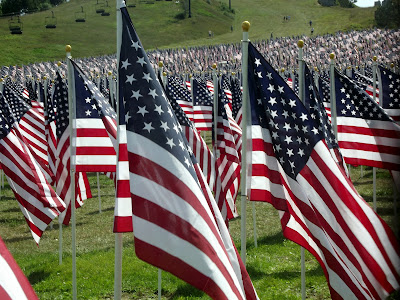 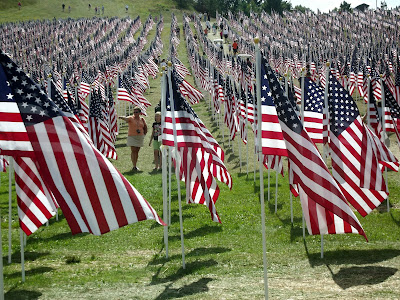 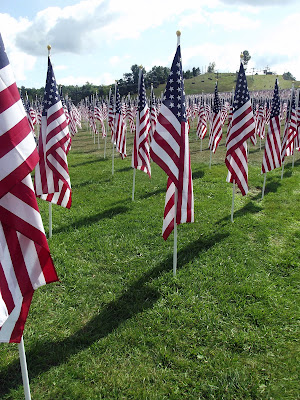 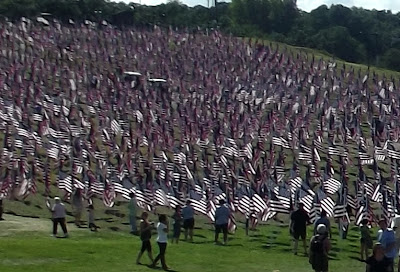 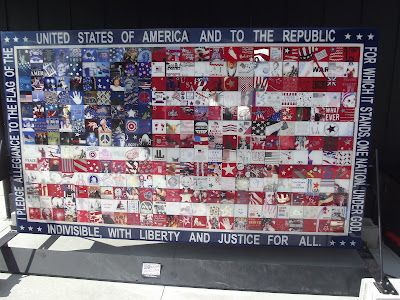 Following is a Proclamation from our Commander in Chief, President Barack Obama
BY THE PRESIDENT OF THE UNITED STATES OF AMERICA
A PROCLAMATION
In the aftermath of the terrorist attacks of September 11, 2001, the American people demonstrated that in times of hardship, the values that define us do not simply endure -- they are stronger than ever. As a Nation, we responded to unthinkable tragedy with an outpouring of service and goodwill. On that dark day, first responders rushed into a burning Pentagon and climbed the stairs of smoking towers on the verge of collapse, while citizens risked their own health and safety to prevent further heartbreak and destruction. As Americans, we came together to help our country recover and rebuild.
Today, we pay tribute to the selfless heroes and innocent victims of September 11, 2001, and we reaffirm the spirit of patriotism, service, and unity that we felt in the days and months that followed. By volunteering our time and unique skills, we can enrich communities across our country, and together, we can strengthen our Nation to meet the challenges of the 21st century.
In the days to come, I ask all Americans to join together in serving their communities and neighborhoods in honor of the victims of the September 11 attacks. Today and throughout the year, scores of Americans answer the call to make service a way of life -- from helping the homeless to teaching underserved students to bringing relief to disaster zones. I encourage all Americans to visit Serve.gov, or Servir.gov for Spanish speakers, to learn more about service opportunities across our country.
As we join in serving causes greater than ourselves and honoring those we lost, we are reminded of the ways that the victims of 9/11 live on -- in the people they loved, the lives they touched, and the courageous acts they inspired. On Patriot Day and National Day of Service and Remembrance, we pledge to carry on their legacy of courage and compassion, and to move forward together as one people.
By a joint resolution approved December 18, 2001 (Public Law 107-89), the Congress has designated September 11 of each year as "Patriot Day," and by Public Law 111-13, approved April 21, 2009, the Congress has requested the observance of September 11 as an annually recognized "National Day of Service and Remembrance."
NOW, THEREFORE, I, BARACK OBAMA, President of the United States of America, do hereby proclaim September 11, 2011, as Patriot Day and National Day of Service and Remembrance. I call upon all departments, agencies, and instrumentalities of the United States to display the flag of the United States at half-staff on Patriot Day and National Day of Service and Remembrance in honor of the individuals who lost their lives on September 11, 2001. I invite the Governors of the United States and the Commonwealth of Puerto Rico and interested organizations and individuals to join in this observance. I call upon the people of the United States to participate in community service in honor of those our Nation lost, to observe this day with appropriate ceremonies and activities, including remembrance services, and to observe a moment of silence beginning at 8:46 a.m. Eastern Daylight Time to honor the innocent victims who perished as a result of the terrorist attacks of September 11, 2001.
IN WITNESS WHEREOF, I have hereunto set my hand this ninth day of September, in the year of our Lord two thousand eleven, and of the Independence of the United States of America the two hundred and thirty-sixth.
BARACK OBAMA
at 10:28 PM