The Alpine Township Historical Commission hosted its First Annual Maple Syrup Contest "Best on the Ridge" today. Nine local partcipants brought samples that were judged by six local judges. The winning syrup came from the farm of Bob and Sally Deems from Conklin.Second place went to Wayne , Ryan and Joy Umlor and Joe Dietrich. 87 maple syrup lovers came to witness this event and many stayed until the end for a chance to do some tasting themselves on some waffles that had been prepared. Many thanks go to the organizer of the successful event, Alpine Township Historical Commission Member Don Doyle. 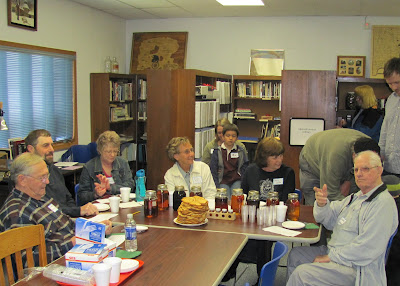 Six judges were on hand to taste nine different productions of maple syrup. Fortunately. no sugar highs were reported. 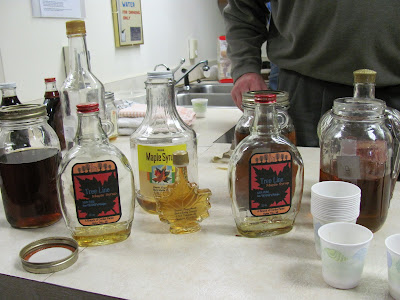 Some of the samples tested 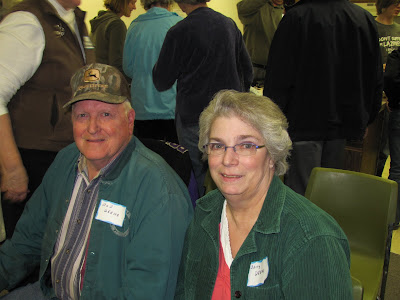 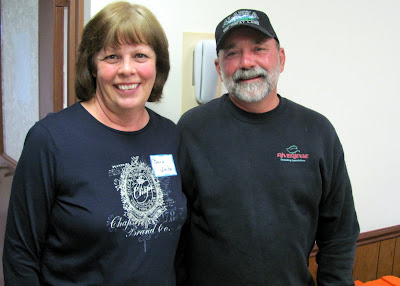 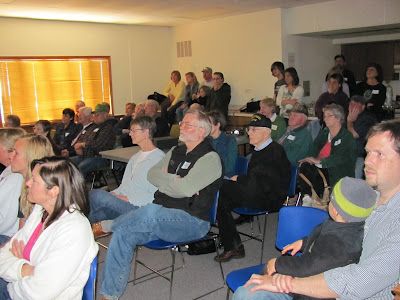 About 87 people enjoyed the festivities 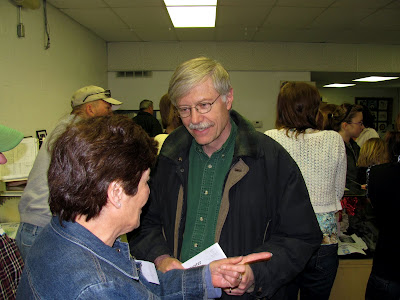 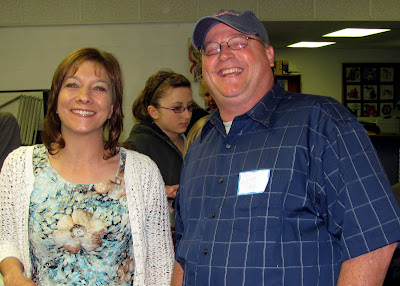 Two battling contestants making peace with each other and already waiting for next year's contest. 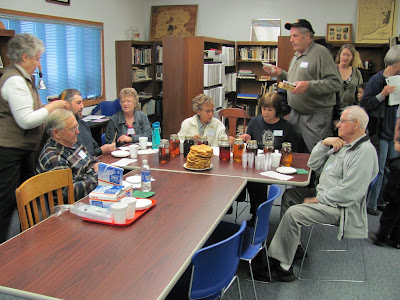 Others who entered the contest were Rob and Nick Cordes, Alpine Twp; Bob Dufort, Sparta, Mark Finkler, Conklin, Warren Guiles, Sparta; Don Rasch, John Paul and Doug Umlor, Alpine Township; Jeff and Linda Rueble, Alpine Township; and Keith and Dave Scheidel, Alpine Township.
In addition to the contest, the audience enjoyed a slide show as well as movie about Michigan produced Maple Syrup.
Long before the earl settlers, native Americans already produced maple syrup to flavor their food.
Here are some facts and figures concerning Michigan Maple Syrup...
•Michigan ranks 6th in maple syrup production in the United States.
•Average maple syrup production in Michigan is about 90,000 gallons per year.
•Economic contributions of the pure maple syrup industry to Michigan are nearly $2.5 million annually.
•Maple syrup is a Michigan tourist benefit. It is a "thing" to buy.
•Maple syrup, as an agricultural commodity, benefits Michigan farm markets.
•There are an estimated 500 commercial maple syrup producers in Michigan with some 2,000 additional hobby or home use producers.
•Michigan law requires that processor of maple syrup must be licensed.
•The production of pure maple syrup is the oldest agricultural enterprise in the United States.
•Maple syrup is one of the few agricultural crops in which demand exceeds supply.
•Only about 1 percent of Michigan’s maple forest resource is used in maple syrup production.
•In an average year, each tap-hole will produce about 10 gallons of maple sap, enough for about a quart of pure Michigan maple syrup.
•Maple sap is a slightly sweet, colorless liquid.
•It takes approximately 40 gallons of maple sap to make 1 gallon of maple syrup.
•A gallon of standard maple syrup weighs 11 pounds and has a sugar content of 66 percent.
•Maple syrup is the first farm crop to be harvested in Michigan each year.
•Maple syrup is not the recipient of any crop support or subsidy programs.
•A maple tree needs to be about 40 years old and have a diameter of 10 inches before tapping is recommended.
•The maple season in Michigan starts in February in the southern counties and runs well into April in the Upper Peninsula.
•Warm sunny days and freezing nights determine the length of the maple season.
•The budding of maple trees makes the maple syrup taste bitter. Thus, production ceases.
•Freezing and thawing temperatures create pressure and force the sap out of the tree.
•A very rapid rise in temperature (25 to 45 degrees) will enhance the sap flow.
•While the sugaring season may last 6 to 10 weeks, but during this period, the heavy sap may run only 10-20 days.
•Average sugar concentration of maple sap is about 2.5 percent.
•Maple sap is boiled to remove the water and concentrate the sugars in a process called evaporation.
•In a conventional evaporator one cord of hard wood is required for every 25 gallons of syrup produced.
•Tubing collection systems with vacuum can increase average sap yields approximately 50 percent.
•Maple sap becomes maple syrup when boiled to 219 degrees Fahrenheit, or 7 degrees above the boiling point of water.
•Pure Michigan maple syrup has 50 calories per tablespoon and is fat-free. It has no additives, no added coloring and no preservatives.
•Maple syrup has may minerals per tablespoon: 20 milligrams of calcium, 2 milligrams of phosphorus, 0.2 milligrams of iron, 2 milligrams of sodium, 35 milligrams of potassium.
•Maple syrup is classified as one of nature's most healthful foods.
•Michigan has a Maple Queen, who is selected each January, statewide.
•Michigan has a Maple Syrup Week held in March of each year.
•Michigan is noted for having two maple syrup festivals.