The United States’ National POW/MIA Recognition Day is observed across the nation on the third Friday of September each year. Many Americans take the time to remember those who were prisoners of war (POW) and those who are missing in action (MIA), as well as their families. Alpine Township was one of many communities in the Greater Grand Rapids area that passed proclamations declaring today as Prisoner of War/Missing in Action Recognition Day in their local community.  Leaders from these communities were on hand this afternoon at a special ceremony conducted at the chapel of the Grand Rapids Veteran's facility in North Park.
NATIONAL POW/MIA RECOGNITION DAY, 2013
- – - – - – -
BY THE PRESIDENT OF THE UNITED STATES OF AMERICA
A PROCLAMATION
Our country endures because in every generation, courageous Americans answer the call to serve in our Armed Forces. They represent the very best of the human spirit, stand tall for the values and freedoms we cherish, and uphold peace and security at home and around the globe. Today, we pay tribute to the service members who have not returned from the battlefield, we stand beside their families, and we honor those who are held captive as prisoners of war. We will never forget their sacrifice, nor will we ever abandon our responsibility to do everything in our power to bring them home.
America remains steadfast in our determination to recover our missing patriots. Our work is not finished until our heroes are returned safely to our shores or a full accounting is provided to their loved ones. We must care for the men and women who have served so selflessly in our name, and we must carry forward the legacy of those whose fates are still unknown. Today, and every day, we express our profound appreciation to our service members, our veterans, our military families, and all those who placed themselves in harm's way to sustain the virtues that are the hallmarks of our Union.
On September 20, 2013, the stark black and white banner symbolizing America's Missing in Action and Prisoners of War will be flown over the White House; the United States Capitol; the Departments of State, Defense, and Veterans Affairs; the Selective Service System Headquarters; the World War II Memorial; the Korean War Veterans Memorial; the Vietnam Veterans Memorial; United States post offices; national cemeteries; and other locations across our country. We raise this flag as a solemn reminder of our obligation to always remember the sacrifices made to defend our Nation.
NOW, THEREFORE, I, BARACK OBAMA, President of the United States of America, by virtue of the authority vested in me by the Constitution and the laws of the United States, do hereby proclaim September 20, 2013, as National POW/MIA Recognition Day. I urge all Americans to observe this day of honor and remembrance with appropriate ceremonies and activities.
IN WITNESS WHEREOF, I have hereunto set my hand this nineteenth day of September, in the year of our Lord two thousand thirteen, and of the Independence of the United States of America the two hundred and thirty-eighth.
BARACK OBAMA 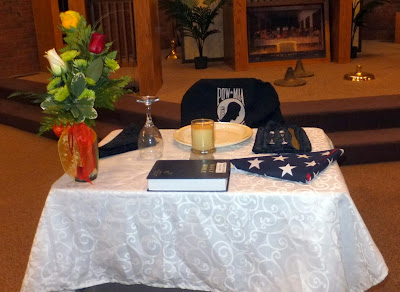 We call your attention to this small table, which occupies a place of dignity and honor near the head table. It is set for one, symbolizing the fact that members of our armed forces are missing from our ranks.
They are referred to as POW's and MIA's.

We call them comrades.


They are unable to be with their loved ones and families tonight, so we join together to pay our humble tribute to them, and bear witness to their continued absence.
This table, set for one, is small, symbolizing the frailty of one prisoner, alone against his or her suppressors.


The tablecloth is white, symbolic of the purity of their intentions to respond to their country's call to arms.
The single red rose in the vase, signifies the blood they many have shed in sacrifice to ensure the freedom of our beloved United States of America. This rose also reminds us of the family and friends of our missing comrades who keep the faith, while awaiting their return.


The vase is tied with a red ribbon, symbol of our continued determination to account for our missing.
A slice of lemon on the bread plate is to remind us of the bitter fate of those captured and missing in a foreign land.


A pinch of salt on the plate symbolizes the countless fallen tears of families as they wait.
The Bible represents the strength gained through faith to sustain those lost from our country, founded as one nation under God.


The candle is reminiscent of the light of hope, which lives in our hearts to illuminate their way home, away from their captors, to the open arms of a grateful nation.
The glass is inverted - they cannot toast with us this night.


The chair is empty - they are not here.
Let us pray to our Heavenly Father that all of our comrades will soon be back within our ranks.


Let us remember and never forget their sacrifices.
May God forever watch over them and protect them and their families