For 11 years, the Mikula family (Four Seasons Lawn and Sports Equipment on Alpine Ave.)has brought Lawnmower Races to Sparta in an effort to draw attention to and raise money for Huntington's Disease.  It is a disease that the Mikulas are well familiar with as it has shortened the lives of six of Jim's siblings.
This year the annual event was named after Jim Keech, a great ambassador for Huntington's Disease and the race which draws drivers from across the country and Canada.
Huntington Disease is inherited and causes certain nerve cells in the brain and central nervous system to degenerate. Loss of these nerve cells causes symptoms such as behavior changes, unusual, snake-like movements (chorea), uncontrolled movement, difficulty walking, loss of memory, speech and cognitive functions and difficulty in swallowing. Treatment aims to limit the course of the disease. There is an adult-onset Huntington’s Disease (HD), which is most common and usually develops when a person is in the 30’s and 40’s. There is also an early-onset form which begins in childhood. HD is an autosomal dominant disorder, meaning that if one parent has HD, you have a 50 percent chance of having the disease—and if you inherited the gene, you will develop the disease and can pass it on to your own children.
Lawnmower racing is not a sport for sissies and drivers as was demonstrated at the race at Sparta Airport Saturday evening.  The "souped up" engines with the mower blades removed can attain speeds as high as 60 miles an hour.
Funds raised by the Mikulas over the past 11 years exceed $100,000 with the hope that the disease will be eradicated through proper research and treatment. Don't miss out on this event next year on Saturday July 19, 2014.
Related Channel 13 WZZM story can be found at http://www.wzzm13.com/news/article/261873/128/Lawn-mower-racing-to-take-over-Sparta
﻿ 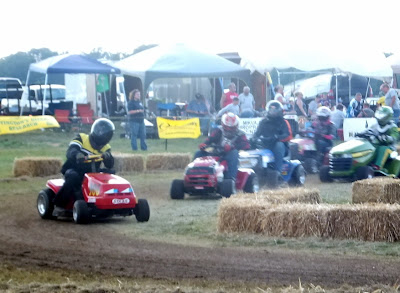 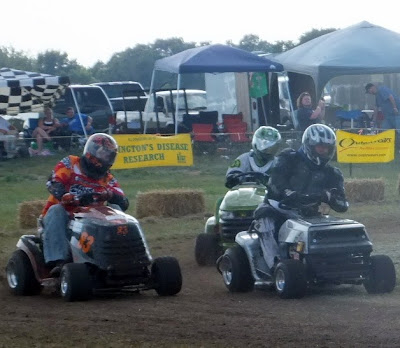