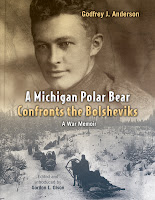 Godfrey Anderson was a local farm boy born in Sparta and raised in the Marne area (Berlin).  In 1918 towards the end of World War I he was drafted and by September of that year found himself assigned to a unit sent to Archangel Russia.  He was part of a contingent of about 5,000 soldiers referred to as the Polar Bears.  At the time, Russia was no longer at war with Germany, but the British were trying to to keep the Bolsheviks from controlling the two main Russuan sea ports, and there was also an effort to recover western issued weapons that had been sent to Russia by the allies that had fallen into the hands of the communist rebels.  Godfrey wrote a book titled "A Michigan Polar Bear Confronts the Bolsheviks". It is a story about his adventures from the time he was drafted until he returned to Michigan in 1919.


On Sunday, Gordon L. Olson presented an illustrated program from the war memoir at the Alpine Township Historical Committee's monthly meeting.   Olson is the editor of this memoir and is Grand Rapids' Official Historian.

As Grand Rapids’ official historian, Mr. Olson has authored numerous books and articles on the history of the area, produced live and videotaped programs, and collected various historic manuscripts, photos and related material for the Grand Rapids Public Library.
Olson's "A Michigan Polar Bear Confronts the Bolsheviks" is available at Amazon.com