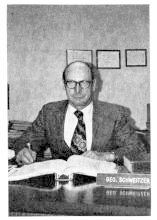 For a second and final time, Alpine Township is saying "thank you and good bye" to former Alpine Township Supervisor George Schweitzer.  George passed away on Tuesday, February 28, 2012 at the age of 93.  George is survived by his wife Marie, 4 daughters, 7 grandchildren and 7 great grandchildren.
The first time Alpine Township said good bye to George was in 1980 when he retired as Township Supervisor after serving Alpine Township for 23 years in various capacities.  He was first elected clerk nearly 55 years ago in 1957, when Alpine Township had a population of of less then 2,500 residents.  In 1958 the Township passed a millage to build it's first fire station.  Until then, we shared a station (Comstock Park) with Plainfield Township.  That same year, building began in the Westgate subdivision, almost doubling the Township's population by 1960.  Building of our first fire station was completed in 1961 and by 1963 a Township office and hall were attached. In 1965 a contract was signed with Plainfield Township to supply water to the Township.  In 1968 the North Kent Sewage System was organized with Rockford and Plainfield Township through the Kent County Department of Public Works, and sewer lines were constructed over the next several years. By 1969 construction of the Westgate sub division was completed, and a decision was made to add a second fire station on 7 Mile Rd. near Fruitridge NW..
In 1970 George was elected Alpine Township Supervisor, and Alpine Township's population had grown to over 8,000 residents.  In 1974  the Township purchased a garage located on the corner of Vinton and 9 Mile Road and converted it into Fire Station #3.    Also during George's tenure, federal dollars played a large roll in bringing a 3-million dollar sewer project to the largest residential area of the Township.  George retired in 1980 but his legacy continued because of the planning and financing that was done under his leadership that led to the building of Westgate Park, the Alpine Community Recreation Complex, and the Alpine Township Library.
﻿﻿﻿

Alpine Township is  thankful for the contributions and achievements made by George Schweitzer, and says "Good Bye, George" with a grateful heart.
Source:  Alpine Township News, Volume 6  #3, October 1980
Military Photo from Alpine Township Historical Committee records
at 11:32 AM