It was as informative as it was entertaining.  Kevin Finney, education and research director of Ancient Pathways, a cultural resource group, presented a program at the Alpine Township Community Room on Indian Trails and how to make black ash baskets and birch canoes.  Part of the program was the viewing of a locally produced movie produced with the help of Kevin called: "Black Ash Basketry: A Story of Cultural Resilience  The movie acquainted the audience with the Pigeon family, a family that has done basket weaving for generations.  It talks about the family bonds that  continue to be established  by everybody in their family participating in this activity, which is not just about the weaving but also the selection of the trees and the stripping of the layers or wood.  A significant amount of time was spent discussing the emerald ash borer, a beetle that is threatening to extinguish black ash tree.  Members if the Pigeon family suggest that nature be allowed to take its course, rather than interfere with chemicals
Kevin Finney   is a cultural historian and educator who specializes in the life and history of Great Lakes region Native Americans. He is part scholar -- hired by schools, museums and historical sites all over the country for his expertise -- and part woodsman who tans his own deer hides.
Kevin Finney also assisted 5th grade students to build a birch bark canoe using only primitive tools.  The canoe was entered in the 2010 Art Prize Festival in Grand Rapids.
Members of the Historical Commission as well as all in attendance were pleased to have Kevin present a terrific program. 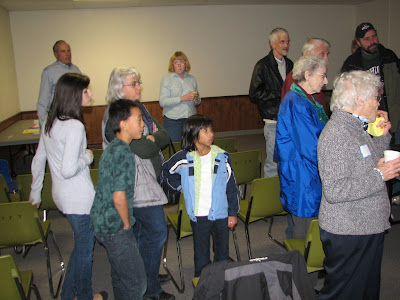 Young and old enjoyed the presentation 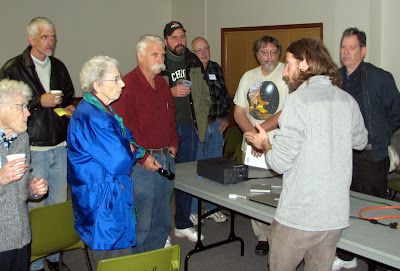 Kevin answering some of the questions for the audience 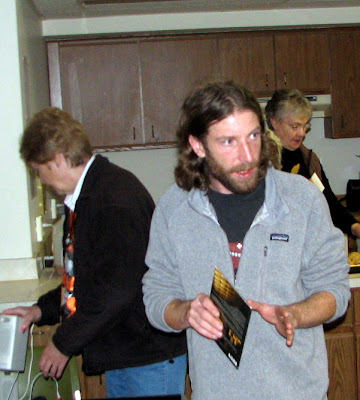